December sales eased, however, slowing sales over the second half of 2022 were not enough to offset earlier gains as sales reached a record high of 29,672 units in 2022.
Over the past several months, the pullback in sales was also met with a significant pullback in new listings, causing further declines in inventory levels. As of December, there were 2,214 units available in Inventory, making it the lowest level of inventory reported for December in over a decade.
“Housing market conditions have changed significantly throughout the year, as sales activity slowed following steep rate gains throughout the later part of the year,” said CREB® Chief Economist Ann-Marie Lurie. “However, Calgary continues to report activity that is better than levels seen before the pandemic and higher than long-term trends for the city. At the same time, we have faced persistently low inventory levels, which have prevented a more significant adjustment in home prices this year.”
Benchmark prices eased to $518,800 in December, down nearly five percent from the peak price in May but almost eight percent higher than last December. While prices have trended down annually, they remain over 12 percent higher than last year’s levels.
The housing market in 2022 generally outperformed expectations both in terms of sales and price growth.
For more information on the 2023 housing market, join us at our Forecast Conference on Jan. 24. 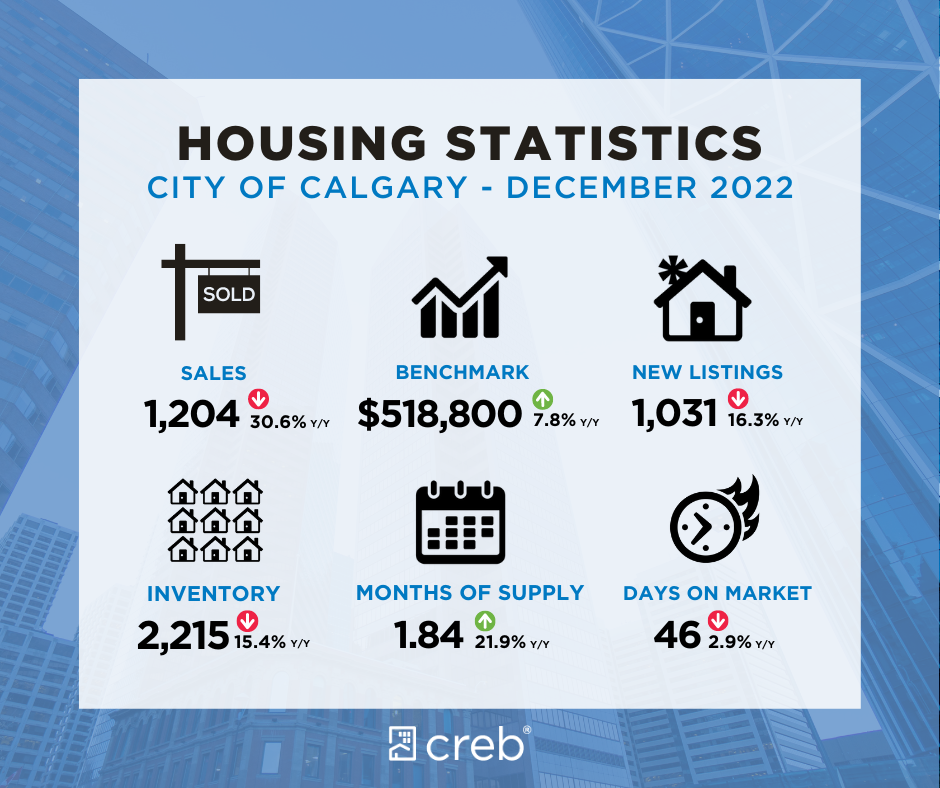 The detached market has felt most of the impact of higher rates as a pullback in sales in the year’s second half contributed to the year-to-date decline of over seven percent. While there have been some gains in new listings over the last quarter, much of the growth has occurred in the market's upper-end, supporting more balanced conditions. However, supply levels for lower-priced homes remain low relative to the sales activity, causing that market segment to continue favouring the seller. Overall, the detached market has seen activity shift away from the strong sellers’ conditions reported earlier in the year.
Prices in the detached market have trended down in the second half of the year, as the December benchmark price of $619,600 has eased by just over four percent from the June high. The recent adjustments have not erased all the earlier gains, as benchmark prices reported an annual gain of over 14 percent. Annual price growth has ranged from a high of 19 percent in the South East, North and North East districts to a low of nearly eight percent in the City Centre.

Further declines in sales this month contributed to the year-to-date sales decline of nearly three percent. While sales have eased relative to last year’s record levels, activity is still far stronger than long-term trends and levels reported prior to the pandemic. At the same time, new listings have been trending down for this property type, keeping the inventory and months of supply relatively low compared to historical levels.
While conditions are not as tight as earlier in the year, there has been some downward pressure on prices. The monthly benchmark price peaked in May of this year and has eased by nearly four percent since then. However, on an annual basis, benchmark prices remain nearly 12 percent higher than in 2021. The North district reported a higher annual price gain of over 18 percent.

Significant reductions in new listings weighed on sales over the last few months of the year. Despite recent shifts, annual sales in the city reached a new record high, with 5,153 sales in 2022. Not only was it a record year, but sales were nearly double long-term trends. Higher lending rates are driving more purchasers toward the more affordable row options. While new listings were still higher than last year’s levels on an annual basis, the recent pullback combined with relatively strong sales has caused inventory levels to fall.
As of December, inventory levels were at the lowest since 2013. This has ensured that this segment of the market continues to favour the seller. While prices have eased by just over one percent from the June peak, overall year-to-date prices are nearly 15 percent higher than last year.

Unlike other property types, apartment condominium sales continue to rise above the previous year’s levels throughout the year. This caused year-to-date sales to rise by 50 percent to 6,221 units, a new record high. Demand for affordable product, along with renewed investor interest thanks to rental rate growth, helped support sales growth. Gains in this sector were also possible thanks to the growth in annual new listings. However, like other sectors, the increase in new listings was not enough to outweigh the sales growth, and inventory levels trended down to levels not seen since 2013.

After several years of being oversupplied, the shift to tighter conditions supported annual price gains of nearly nine percent. While price gains occurred across every district, city-wide prices remain well below the previous highs reached back in 2014.

Sales in Airdrie have declined since April, mainly because of the significant drop in detached home sales. December was no exception, as sales slowed compared to last year’s levels. Despite recent declines, year-to-date total residential sales increased by seven percent and have set a new record-high of 2,469 units. Regional population growth combined with the relative affordability of homes in Airdrie compared to Calgary are some factors supporting the record sales in 2022.
While new listings trended down in December, 2022 saw a general rise in new listings in the market. This has helped support some recent year-over-year gains in inventory levels over last year’s exceptionally low levels. Recent adjustments in both sales and inventory levels have caused the months of supply to trend up from the strong seller’s market conditions reported earlier in the year. However, conditions remain relatively tight with less than two months of supply.
The December benchmark price in Airdrie has eased by over six percent from the April peak. However, this is still 12 percent higher than last year's level. Overall, the annual benchmark price in 2002 was $489,558, nearly 20 percent higher than last year's level.

December sales eased, contributing to the year-to-date decline of eight percent. The annual pullback in sales was met with new listings comparable to last year. This has helped support some inventory growth in the market, but levels are still well below what is typically available in the resale market. While inventory levels remain low, the recent pullback in sales has resulted in more balanced conditions taking some of the pressure of price growth seen over the last four months of the year.
On an annual basis, the benchmark price reached $504,067 in the town, nearly 17 percent higher than last year’s prices. Price gains were the strongest in both the detached and semi-detached sectors, where prices rose by 19 percent, establishing 2022 as the new record-high price.

Sales activity eased in December, but the year-over-year pullback over the past few months has not offset the gains reported earlier in the year, as year-to-date sales activity rose by nearly two percent. This growth in sales was met with additional new listings in the market, helping support higher inventory levels over last year’s record lows. Even with some inventory growth, conditions continue to remain tight with under two months of supply, placing limits on the price adjustments.
While prices have trended down from the high seen in May, on an annual basis, benchmark price growth in the town was nearly 16 percent. Price growth was strongest in the detached sector, which for the first time, pushed above $600,000 on an annual basis.
Click here to view the full City of Calgary monthly stats package.
Click here to view the full City of Calgary Region monthly stats package.